The Majitora! Wiki is a male to female transgender themed wikia. The Main Character, Minami Maki, a typical 'male' high school student, finds that by joining an after school activity club, they can begin presenting as their correct Gender Identity of female, first as fantasy anime girl named Maho Curry, then also as an ordinary, but attractive teenage girl named Karii Maki.

The Media Wiki page can be found here.

Majitora! was created, written, and drawn by Yutaka Kashii. It was first published as a manga doujinshi, then later picked up and published as a serialization by the magazine Minna no Comic. The published run in the magazine lasted from Nov. 11, 2015 to Jan. 18, 2019. There are 65 chapters collected into 6 volumes. The first 47 chapters have been translated into English, and have been scanned by Seison Scans. Translation into English by Milleniumbug. The scanlations were mostly done from 2016 to 2018, however, the posting of the manga in English on the Internet is still ongoing.

(Wiki Note---The mangaka for Majitora! was informed in late 2019 that serial publication of Majitora! has come to an end. Chapter 65 was the last chapter to be published in Japanese. It remains to be seen how many more chapters will be translated into English and posted on the Internet. As of Nov. 2021, this wiki has chronicled all of the available English translations of the story line, temporarily ending with Chapter 47, so far. As more English translations are made available and posted to the Internet, this Wiki will be promptly expanded to include all translated text and story lines as they becomes available. Rest assured, this wiki will be constantly updated with the latest material.)

One day shortly after high school had started, Minami-kun, a typical 'male' high school student, spots a poster on the school's bulletin board recruiting new members for the "Mahou Shoujo" Club. Thinking "OMG, Cosplay Cuties everywhere !!!", he decides to join ! What the hell ! The poster said that boys can join, too ! However, Minami-kun soon finds out that the club is not about cosplay, or even cross-cosplay. Do members actually become real, live anime girls ??? Are members really expected to go through a Henshin (Transformation Sequence), become an anatomically correct teenage girl, wear a little girl's fantasy costume, present herself as an anime 'Battle Maiden', and along the way learn all the things that are kawaii (cute) and oh so feminine ??? A slice of life love-comedy revolving around miracle girls, the strength and durability of childhood friendship, having the courage and motivation to transition to one's own correct gender identity, and the many slippery slopes that can be experienced along the way. A transgender themed story of how a perceived 'male' can overcome the "Agony of Defeat" of going through high school confined by one's own perceived male birth sex, and enjoying the "Thrill of Victory" by transitioning to and becoming not only a fantasy anime girl, but also being the cute, pretty teenage girl that they were destined to be all along, to match their female Gender Identity ! 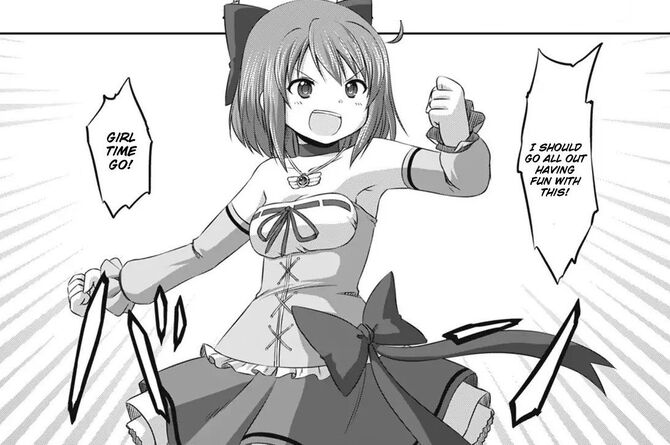 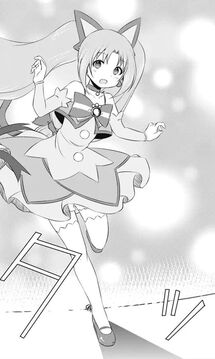 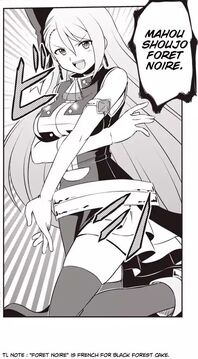 Transitions from male to female

The Members of the Mahou Shoujo Club

Click on each picture to be taken to that character's profile page, with additional information about the character. 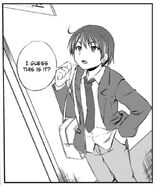 What Manga Fans Are Saying About Majitora!

I got here thinking, "there is no way this [will] have something to do with trans people", and then Wooow [Jackpot!!!] LOL!

This is a real gem of a manga. It seems just simply colorful and expressive and simple on the outside. But there's a nuance behind all of the characters. Take Karin for instance -- a lesser manga would just make her wear her feelings on her sleeve. Or she'd be overtly jerkish towards Minami's new favorite 'hobby', up at least until a single chapter causes her to turn on her heels. Instead, she's got mixed feelings about everything that's going on and her discomfort is expressed subtly. There's [great character] build here [in all of the characters]. And it's hard to not want to cheer on Minami for their [female] identity exploration and enthusiasm for their new gift.

Seriously, this manga is an awesome exploration of gender-sexual expression and sexy fun times and I'm super grateful for your work in translating it, milleniumbug.

This manga; it's funny and a precious piece which [can] lighten my day whenever I feel down and bad about life ^^ Ahh~ a great boost to my mind.

The newer chapters has the best character development I have seen for a manga, really shows how far they [the mangaka] have come.

Although there is no anime of the Henshins of the Maho Shoujo girls of Majitora!, since this is a manga, nevertheless, shown below is an Anime Music Video of several girls going through Henshins (Transformation Sequences) that are very similar to how Maho Curry, Pretty Saku-Nyan, Foret Noire, go through their Henshins to become anime girls. ( The Dark Lord, Lord Kaiserk, the Maniacal 'Girl', transforms instantaneously, therefore they have no Henshin. )

This Wiki, based on the doujinshi manga Majitora! is a transgender-themed wiki, and may not be suitable for children or pre-teens. READER DISCRETION IS ADVISED !!! That being said, it is expected, and insisted, that everyone coming to this Transgender Themed Wiki must comply with the LGBTQIA+ Guidelines instituted by FAMDOM management, so as to be respectful of transgender characters, as well as transgender concepts presented in the manga and anime stories.

This doujinshi webmanga will be retold in this Wiki, chapter by chapter, in English by a manga fan that is a male to female transgender person herself. This entire "fan's creation" fanon style Wiki will feature research, highlights, commentary, editing, positive transgender viewpoints, and additional revised text presented in the true spirit of creative doujinshi manga storytelling. This Wiki will faithfully follow the story and the experiences of the main and side characters. However, in the interest of simplified storytelling and concise presentations, this Wiki will be an abridged version of the manga, with only minor details being condensed and edited down.

The Main Character is shown to be not only a transgender male to female teenager, but is also a Bigender character, changing between male and female, presenting themselves as either their birth gender of perceived 'male', or as their Gender Identity of that of being female, both as a fantasy anime girl, as well as an ordinary teenage girl with a very feminine Gender Expression. This Wiki will refer to the MC, Minami, with male pronouns consistently throughout the chronicle of the chapters of the manga, and throughout the character profiles when they are presenting as being perceived as 'male'. However, Minami ( as Maho Curry or Karii Maki ) will be referred to with female pronouns in the chronicle of the manga and character profiles when she is presenting herself as a fantasy anime girl, or as a typical cute teenage girl. Cis-gendered characters will be referred to by their subsequent pronouns, as shown by their Gender Identity and/or Gender Expression that they are presenting, at the time of their inclusion in the overall story, and will be done consistently thereafter. Character(s) who present with perceived, ambiguous, undetermined, or deliberate masquerading and/or masking of one's gender identity and/or gender expressions and presentations ( gender bending ) will be identified by the gender markers being placed in quotes ( i.e. 'male' / 'female' ) according to the perceived gender identity and/or gender expression that they are portraying at any given time. The manga character that has a male gender identity and male gender expression, but who, at times, masquerades as a spiritually dark-minded female anime girl, or an ordinary teenage girl ( thus gender-bending ), will be described as stated above. ( This policy towards this character will be subject to change if the character turns out to be a bigender or transgender person ).

The Management Positions for Majitora! are all taken, and the editing manpower of this wiki is currently adequate. This fan created wiki is a very specialized and narrow focused wiki, that being a male to female transgender themed wiki, featuring positive male to female transgender attitudes and viewpoints, and would be best to be edited by transgender people themselves, who can tell the feelings and stories of transgender persons with personal conviction, understanding, and compassion. However, if you still feel that you supposedly must edit on this wiki, you MUST observe these Editing Guidelines, found here.

Or if you like the subject and theme of this Wiki, check out these other male to female transgender themed Wikis by clicking on the Wiki title---

Until I Become Me Wiki

My Brother is Done For Wiki

Gonna be the Twin Tail

Community content is available under CC-BY-SA unless otherwise noted.
Advertisement